It is with great sadness that we announce the death of John Douglas Wightman on 27 January 2018, at the age of 94.

John was born on 25 August 1923, the first child of Hilda and John Wightman of Rosemeath Terrace, Edinburgh. He attended George Herriot’s school, before progressing to Heriot Watt University where he studied Electrical Engineering.

During the war years, as part of the RAF, he was stationed at the Royal Aircraft Establishment in Farnborough where he worked on various research projects.  He returned to Edinburgh to complete his studies, graduating in 1947, whereupon he joined the firm of Scottish Cables in Glasgow. He married Rachel, his wife of more than 50 years, in 1952 and his two sons, Matthew and Tim, were born in 1954 and 1957 respectively.

He returned to Edinburgh in 1958 to begin his long career with the National Coal Board, based initially at their offices in Lauriston Place.  Various moves resulted in his eventual promotion to the position of Chief Electrical Engineer for the NCB Scottish Region, a position he relinquished upon his retirement in 1986 at the age of 62.

Over this lengthy career, he presided over the demise of deep coal mining in the UK, a topic on which he would often reflect with sadness. He was committed to his work and keen on all aspects of power generation and the newly emerging energy efficiency industries. So much so, that when a part-time consulting position arose with the Scottish Office he leapt at the chance to be involved. The role sustained his appetite for technical and social interaction for the next 20 years.

He was an active member of the Institution of Electrical Engineers (now the IET) for over 60 years, having joined as a student in 1944. He became a Member in 1966 and a Fellow in 1972.

John and Rachel moved to Auchterarder, near Perth, shortly after his retirement and became involved in many local activities. His long-time enthusiasm for the game of golf provided a release from working life and he remained an active member of the local club until 2015.

He was blessed with good health until shortly before the end, when he succumbed peacefully after a short period in the local village hospital.  A true gentleman, he is much missed by his family and all who knew him. 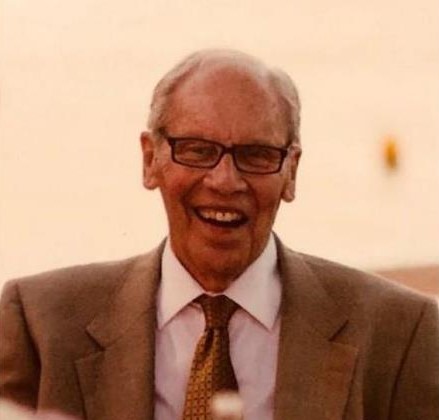