Sir Frank Gill, former President of the Institution of Electrical Engineers (IEE), is being featured on a set of stamps to celebrate his career achievements, that will be showcased by the Isle of Man Post Office.

Frank, born in Castletown, Isle of Man in 1866, was a telecommunications engineer and pioneer of telephony. He was President of the Institution of Electrical Engineers for the presidential year 1922-23 and an Honorary Fellow of the IEE. In November 1922 he gave his IEE Presidential Address which was later quoted as “the greatest paper on telecommunications of the 20th Century.” Through this, he convinced the ‘Big Six’ (Marconi, General Electric, British Thomson-Houston, Metropolitan Vickers, the Radio Communication Company and Western Electric) to join forces and form one organisation. This saw the start of the British Broadcasting Company (BBC). 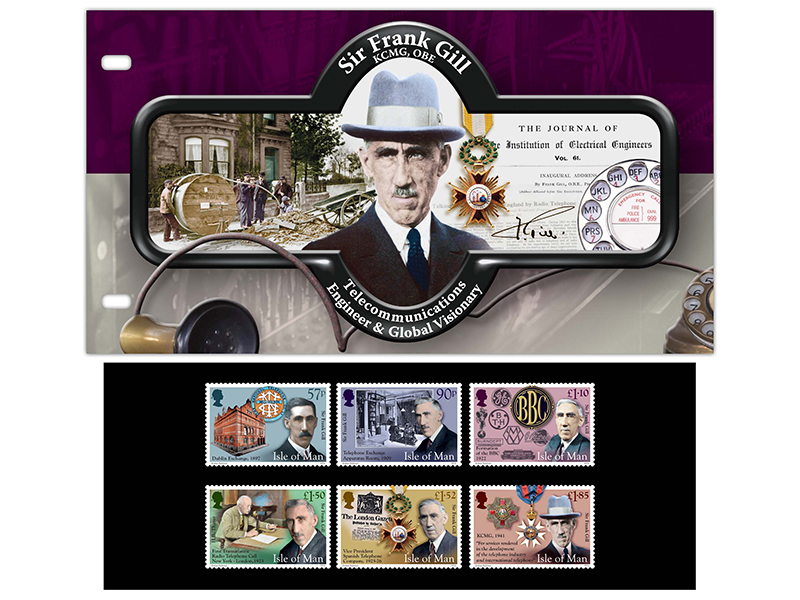 The 1941 Birthday Honours List detailed Sir Frank Gill’s knighthood “for services rendered in the development of the telephone industry and international telephony”.

Sir Frank remained active and prominent within the profession and was attending a communications conference in Geneva when he was suddenly taken ill and died on 25 October 1950.

The stamps were designed by Andrew Robinson and will feature six different designs celebrating achievements from Frank Gill’s illustrious career. The Manx born engineer made innovative contributions to the development of twentieth-century telecommunications worldwide and put the foundations of the BBC in place.

The highly illustrated, four-page presentation pack features a set of six stamps along with a fascinating insight into the career of Sir Frank Gill.

The information was written by Robert Stimpson, Chairman of the Isle of Man Victorian Society, who has played a fundamental role in the celebration of our past President’s achievements.