On Friday (3 August), the IET teamed up with venues and organisations across the UK to host its fourth Engineering Open House Day for young people and their parents.

In total, the events attracted more than 2,000 visitors and included a range of workshops and practical activities designed to inspire young STEM enthusiasts to think about engineering as a future career.

At BBC London, children and parents were given access to the Blue Rooms, with the latest technology being showcased, such as artificial intelligence, virtual reality, and software engineering.

Megan Mbala, aged 15, who attended the BBC event said: “Today was a lot of fun, I really enjoyed trying new technology that I wouldn’t really have a chance to try.”

Hannah Paveley, aged 15, who attended the Engineering Open House Day event at Renishaw in Gloucestershire said: “It was really enjoyable! There were a range of activities to do – it was really hands on and the talks showed me how many areas of engineering and technology there are to get involved in!”

Daniel Phillips, aged 12, who attended IET London: Savoy Place, said: “I have really enjoyed this event and the hands on approach to learning made it easier to learn about the different subjects in the event. The event gave me more ideas for the future. I would recommend an engineering career to anyone who enjoys the subject - they should definitely look at a career in engineering because it is a fun, enjoyable job with many options which can get you very far in life.”

Penny Cater, who is a guardian for pupils at Boswells School, also attended IET London: Savoy Place – she said: “An incredible venue filled with amazing engineering and creative individuals. I feel privileged to have met so many future innovators. Thank you for a great day.”

Engineering Open House Day, forms part of the IET’s Engineer a Better World initiative and aims to show young people and their parents how creative and varied a career in engineering can be by inviting them behind the scenes at some of the UK’s well known attractions and organisations.

New IET analysis has revealed that those who’ve studied or work in STEM, earn more, save more and are more likely to say they are in their dream career – see full press release.

A round-up of the social media activity can be seen on the campaign site. A IET.tv video is also available which can be watched via the IET.tv platform. 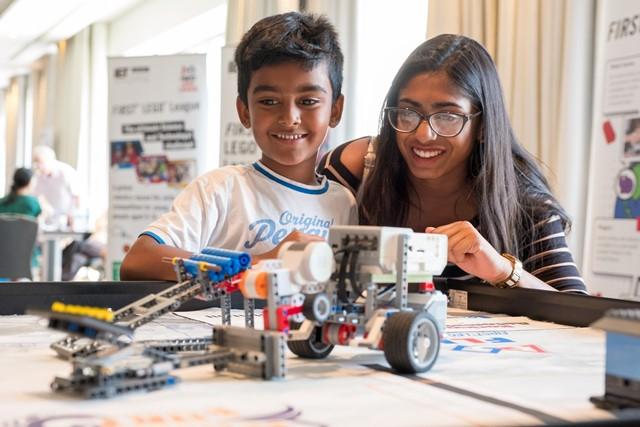 A child and his parent at the IET London: Savoy Place EOHD event.