Navindra Pyneesamy Mooroogan BSc MSc MIET recently travelled from Mauritius to Tanzania to pursue a life-long dream and prove that anything is possible if you keep a positive state of mind.

Navindra recently made the 2,900 km journey from his home in Mauritius to take on one of the world’s largest mountains and climb to the summit of Mount Kilimanjaro. A proud IET member and engineer, not only did he pack the essentials for his once-in-a-lifetime trip, but he also took along an IET flag to fly at the summit!

There are two things Navindra is passionate about  – the first being engineering. Navindra became interested in engineering as a child after constantly breaking his toys to figure out how the mechanisms worked inside. He enjoyed maths and science at school and wanted to follow in his father’s footsteps to become a marine engineer.

He went on to study engineering in Mauritius and Brunel University in the UK before becoming a Technical Manager at Tropical Submarine Safari Ltd, with responsibility for a fleet of boats, submarines and subsea vehicles.

His other passion is nature and, growing up, he was inspired by the landscapes on the National Geographic Channel and Ushuaia TV. After seeing the mystical peak of Mount Kilimanjaro he set himself the goal that one day he would climb to the summit.

He started training for the expedition seven months ago: “Mauritius has a big range of mountains and, as part of my preparation, I climbed nearly all of them – the highest being “Piton de la Petite Riviere Noire,” which reaches a height of 828m,” he explained.  “Though not a high altitude, each mountain has a different level of difficulty and enabled me to hone my physical and technical skills.”

Navindra also worked on his physical fitness and focused on yoga and different breathing exercises to prepare him for the climb.

What was the most difficult part of the challenge?

“I started the hike on 31 May and reached the Uhuru peak at 5895m on 5 June 2018. The summit is by far the most challenging part of the climb. I started walking around 11pm when it was pitch black and the temperature was around minus 15 degrees Celsius. You have to fight against the cold, isolation, exhaustion and the lack of oxygen. Once I reached the Uhuru peak, I was told by my guide to stay for only 15 minutes due to the risk of altitude sickness. During the descent, walking on slippery snow and being exposed to the sun was not easy. But, the beauty of nature on Mount Kilimanjaro is so overwhelming that I forgot about these difficulties. The secret to climbing Mount Kilimanjaro is to keep a positive state of mind."

Navindra went on to explain why he took an IET flag with him on his expedition:  “I consider the IET to be the headquarters of engineering intelligence and home for all those who are passionate about engineering and technology. Being a proud member of this great Institution is a privilege and that is why I carried the IET flag to the summit.”

What’s next for Navindra?

“What I keep in my mind is the moment of joy I felt when I reached the summit and the sense of deep satisfaction I had having accomplished a life-long dream.

"The IET allows me to keep updated with the global evolutions of engineering and technology, which contribute to my CPD. I usually attend all the meetings organised by the IET Mauritius branch, which is a great networking platform among peers, and I really appreciate how the IET facilitates the process of professional registration with Career Manager.

“My next goal is to complete my professional registration and attain CEng status. I am interested in new professional challenges that will allow me to develop my knowledge and competencies in the field of renewable energy and I am ready to relocate internationally.” 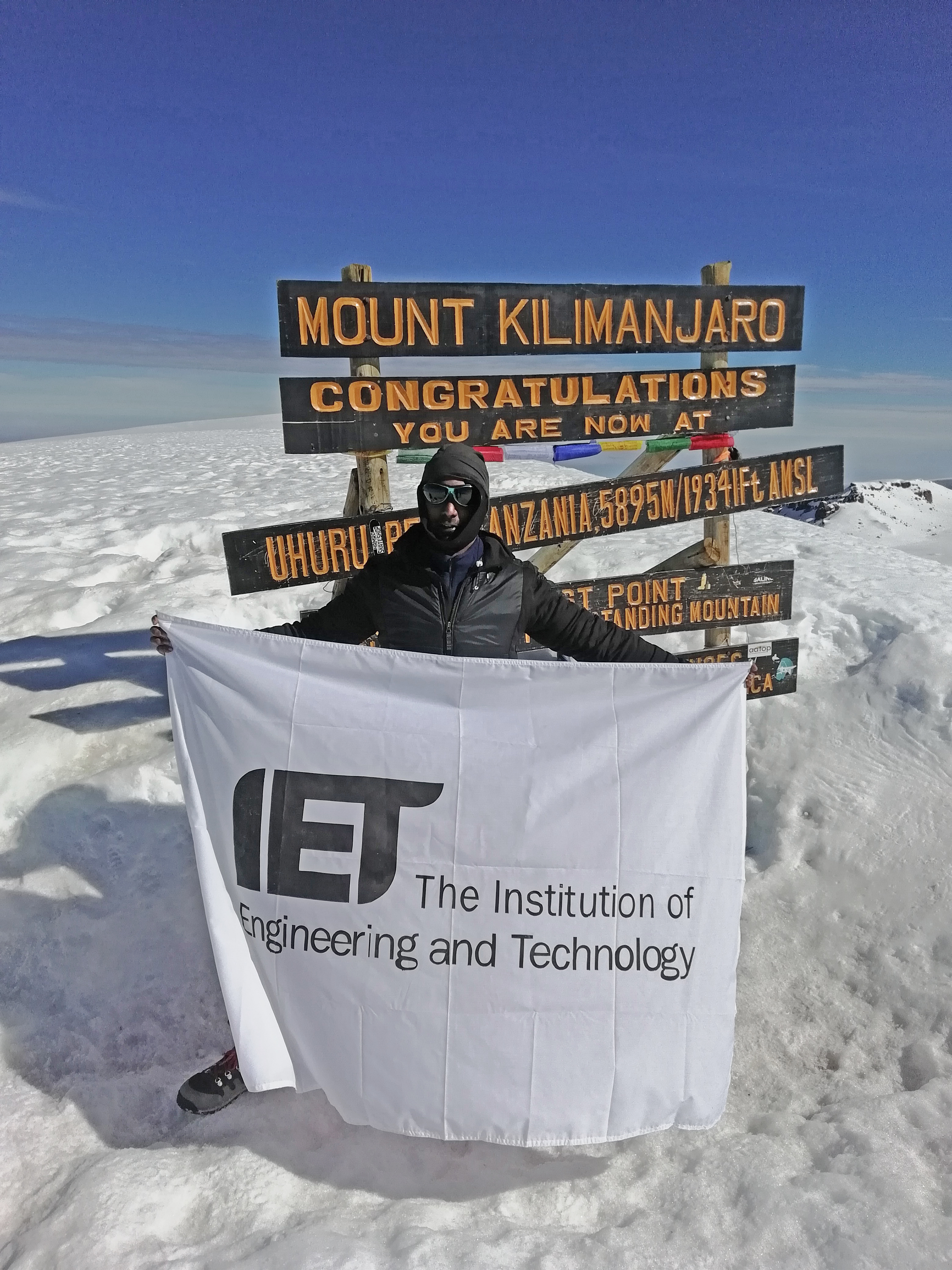 Navindra at the summit of Mount Kilimanjaro with the IET flag