Pete Gracey believes that Chartership has given him more opportunities since moving from the Royal Navy to the rail industry. Now an Engineering Safety Case Manager at Bechtel working on Network Rail’s part of the huge Crossrail programme – who can argue with him?

As well as constructing new underground tunnels, engineers at Bechtel are upgrading the existing railway network outside of London. This means that when Crossrail (Elizabeth line) trains leave central London tunnels, they will run to Heathrow and Reading in the west and Abbeywood and Shenfield in the east.

“We’ve remodelled station areas, built a brand new station at Abbeywood and electrified the line from Heathrow Junction to Maidenhead,” Pete says. “We’ve also put in a new flyover at Heathrow and a diveunder at Acton.”

The work is extensive, so the list goes on. Perhaps of most interest to passengers, it will result in a 10% increase in London’s rail capacity, easing congestion, improving journey times and offering better connections. 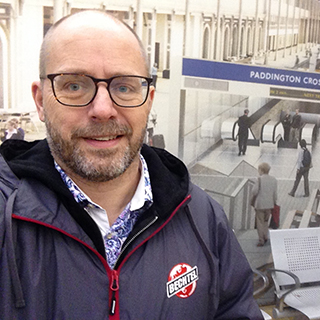 And Pete’s role?  “My job is to make sure we get the necessary safety approvals so that Network Rail can introduce this work into service,” he says. “My team identifies hazards and risks that exist in the designs and makes sure that they are removed or reduced to acceptable levels.”

Developing as an engineer

Pete’s journey to Chartered Engineer and railway engineering wasn’t a direct one. He started out in the Royal Navy, taking a BEng, then professional courses to qualify as a Submariner and a Submarine Weapon Engineer Officer.

Throughout his career, Pete has paid attention to his Continuing Professional Development (CPD).  After 19 years in the Navy, he decided ‘he’d done all the sea-going things he was going to do’ and looked for a new opportunity to develop as an engineer.

“I ended up working for a defence contractor, but while I was there I knew I wanted to do something different,” he says. “It was at that point I saw an advert from Network Rail.”

Pete made the move between industries, taking a seven-month conversion course to become a Railway Signal Engineer. In the 14 subsequent years, he hasn’t stood still, working at different rail companies and with all sorts of signalling technologies, from semaphore to automated driverless systems.

It’s not all about technical skills

Pete acknowledges that there is more to working at Chartered Engineer level than having technical skills.

“I have five engineers working for me,” he says. “I also manage the contract with our independent safety assessment body.”

An ability to communicate effectively is also important, Pete says: “At the end of each phase of a project, it often falls to me to present a safety assessment report and declaration of risk to a system review panel. I explain how we’ve addressed the identified risks while doing all that’s reasonably practical to meet stakeholders’ original requirements.”

Pete became Chartered during his notice period at the Royal Navy, partly because he felt it would look good on his CV.

“It has given me an advantage in terms of what I’ve been able to do since,” Pete says.  “Bechtel has an internal certification programme, and the certification that I hold requires professional registration as a Chartered Engineer.”

However, Pete believes that besides career progression, there are other reasons to become Chartered.

“When I went along to my professional interview, I got told I should have done this eight years earlier – and I wish I had,” he says. “It demonstrates your commitment to the profession and gives you professional recognition.”

“This is important in a country where many people think of an engineer as ‘someone who fixes my car’. Being able to call yourself a Chartered Engineer marks you out as different.”